Crossing a plateau, my friends softly pointed towards what seemed a cliff on the right-hand side. Soon I stepped on a creaky platform and looked into the landscape.

“Is it functional?” I wondered whether the thing could slide down. A nod came as a reply. I could see some of the rock face we were standing on, and was thinking, also about getting out of the gorges before the dark. We were on the way to one place about which other locals advised the locals. Gayang had to remember many streams and forks in the jungle if we were to find it in time.

I looked down at the sort of the structure that plunged over 20 m down. “Good idea to have a look down, I think.” The first steps were tilted and the bamboo a little slippery but there was a railing to hold on to. First, it was some 15 m of almost vertical drop. “Good functional” sounded from behind.

When we returned, I noticed the man with the girl were also down and are now climbing back. The steps were nearly waist height of the kid, hands and legs stretched as she could. She even looked more agile at it than we did. Her father moved casually behind her but I could see through the lens he was watching her movements.

I was shooting until she got to the top. I put my knee to the ground and grabbed her hand: “Brave girl!” Feelinda saw me (and heard) photographing so she wasn’t that surprised. I would say she was quite pleased with the attention. Everyone was smiling and chatting, but the wide-open eyes were curious about the unusual appearances more than about the climbs she does every other day. There was something else in the air, too. We had some interesting conversations today, ones that contributed unexpectedly, and it was a high bar to reach to consider something a contribution in these special days. They sprang spontaneously. It happens when people feel close. This was also a reminder of how quickly it can happen. They were about the young generations. The vibration was felt there. At one occasion later, my friends were speaking Khasi but the father’s face showed unmistakeably the chord was stuck. I think I saw a hint of surprise too. Strange foreigners. 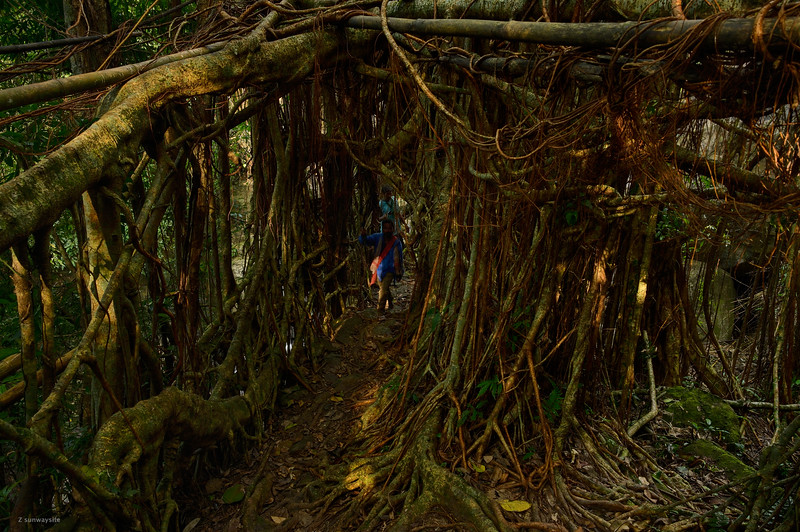 Men from the village (before we reached it) are crossing the root bridge. The first sunrays penetrate the forest. Something we wanted to avoid. That’s why we set off early in the dark.

Our friends, born in these hills, sat down when we were shooting on this side and were having their snack. We crossed to the other side and turned left to climb under the bridge. But the climb was riskier than expected. This terrain changes with each rain.

Things that could go wrong flashed in front of my eyes soon after I passed the spot. I turned and climbed back warning Zlatka, cutting through the torrent’s roar when she appeared within reach. Did we rush this now? About 10 cm of sloping ground covered with dirt, debris and leaves that I cleared partly for her foot was separating a person from a fall onto the rocks. The bamboo pole she also used could help or do the opposite as a temptation of holding the weight a little longer could break the critical movement. The way she looked (and being more conservative than me), surveyed the terrain and moved made me stare on but the realisation that we broke our rule was dawning on me increasingly. Her bag wasn’t bulky, and she didn’t carry the tripod but this was hazard without a rope. It wasn’t easy on the way up as well. We still have mixed feelings about the climb today. It was right on the edge of yes or no (as it was that day). We were not shooting long when we saw our companions climbing down too. I didn’t have time to think but somehow I didn’t expect that. The teacher Bilang, 58, had an advanced stage of apparent cataract in both eyes (“can still see but small things”) and Gayang (40+, as Bilang put it) was wearing flipflops. Hmmm. They soon appeared in the ravine happy and went about exploring gigantic boulders, views of the confluence of two rivers below and knocking down fruit.

Gayang remembers huge trees reaching to the edge of the river in the village. A massive flood in 1988 bulldozered all out, together with 27 houses, moving landmark boulders and rocks (parts of waterfalls) of enormous sizes across the whole sections. He was pointing out some of them, showing the places where they originally were. The force of such flows is out of our natural world.

The trees make a comeback after events like this in a hundred years or so, but with the human element playing now decisive role this is more than uncertain. When he talks about those trees, his eyes seem to roam into a distant beauty of impalpable dream that he can’t bring back.

Fishers often stay out in their tents. The handmade boats (including the planks) are made in a small village community some way downstream. The termites are finished with the boat like this in three years, then a new one is needed.

A greater part of the maintenance workers in this National Park are women. The workers spend the day in the bush so they have provisions with them.

Talking the flora with Dilip (after photographing silk-cotton trees). We arranged for an experienced guide in Manas NP. From dark to dark, we spent time in the forest using a good jeep and tracks. After a couple of days of seemingly endless miles in all sorts of terrain, the vehicle’s squeaks and creaking turned into strangely melodious, and harmonious music. All kinds of creatures were popping up also on the tracks or crossing it, including the elephant herds, they were part of the forest. Moving along a narrow slice of the passing scenery, you slowly realised that millions of other slices around at any moment bring the same parade of the ever-changing canopy and the life that inhabits it.

The other man is a guard who turned into our shadow every instance we jumped out of the jeep and melted into the forest. He could use a gun to scare off any creature that we could surprise or find in a bad mood. We were careful that didn’t happen but the control is limited. The movement of the man was fluid and his senses sharp, so it was as if he wasn’t there. The human figures in the picture bring out the grandness of the landscape.

(We are giving some more use to the old D750 strap on our ML camera, on the telephotos (on Z 6 and D750) we use the Peak Design straps. These can be adjusted quickly on the fly and are fast to detach.)

The somewhat serious face right next to Zlatka is the chief cook, a humble and very considerate man.

It looks like there is no porridge left in London these days (as the new flu arrived, the shops struggle to restock). It reminds me of our days on our journey in India, although for different reasons.

We usually have porridge for about half of our breakfasts at home. Starting the day with something the bodies know and that carries you well into the half of the day, can help to stay resilient and flexible on travels. A seemingly insignificant thing can make a difference in keeping the mind focused in foreign or unpredictable places. So, we traditionally try, whenever cooking is possible, to get our hearty portion of oat porridge to our stomach. And when we can simply order it, it’s two or three portions of what your usual tourist eats for breakfast. The more days we manage that, the better.

Getting the oat flakes was easy enough in Rajasthan and Varanasi but after that, the porridge was taken for meals that, although they look similar, were of some other content. The oat was unknown in these parts. Determined to stick to our “strategic” goal, we were searching around the street shops. We got lucky twice. In the first shop in Assam, a man with a red dot on his forehead looked at the packaging we showed him, reached high to the shelves and passed these exact bags of porridge. Encouraged we asked for a jar of honey and here came the jar as well! Bananas and things like this were easy to find.

The oat bags came from Australia for a set price of Rs 99. The flower honey (sweet) is of local production and goes for the same price. These are generally high for most people in rural places, but some locals buy these oats. In Shillong Zlatka, after asking around in aisles, found a shop where a grandmother cut out from a fairy tale book passed her the familiar bags of flakes. Despite trying hard, the local driver from Shillong had no idea where to find a shop that could sell it to us. It was unlikely the tourists would get here for shopping, the buyers had to be local people of this large town. To our surprise, we have seen very few tourists from Europe, if any, in India at the time we were there. The few we recollect were Americans in Varanasi, these were experienced travellers rather than typical tourists, and a Spanish/Thai man, a capable hardcore traveller in Assam - people closer to the locals and ourselves. Travelling to see specifically nature is common in India but the number of people of all ages, and with most you wouldn’t immediately pick they have such interests, was surprising and humbling at the same time. These people are broadly Indian middle class but they have still much less for most of us to consider rather expensive and basically immaterial interests like travelling to see plants and animals.

Apart from this, we asked in tens of small shops and people didn't know. Using different grains for their cooking, the oat was not the kind. So we always bought a stock that kept us going for the time. Zlatka then helped in kitchens or cooked it, like here, by herself, despite the presence of excellent cooks. Because they didn't know the grain, they were unsure how to go about cooking it. We had plenty of opportunities to enjoy the treats prepared by them, especially at this place (next to a village). The package of oats sparkled interest in the first days; people looking for the utensils in corners of the kitchen, everyone interested how it goes. Our hosts were very nice people. Zlatka could come and make it our way with no milk, in the water. Always heading somewhere early. So, it seemed unlikely, but we were lucky enough for the places and people to have our “strategic” porridge for the whole time wherever our journey took us, apart from moments when we couldn’t cook.

There is another loose analogy to London these days in Zlatka catching a virus that wasn’t part of the seasonal cycle that we were vaccinated against. She eventually collapsed to bed with 39 C body temperature near Gibbon Sanctuary (it took a while before we got hold of a thermometer). To our relief, it turned out to be a local virus known as “virus fever” (obviously a known virus) and sure enough the effects were different from what we experienced before. It could have been something worse and mosquito related. More on that perhaps when it comes to this beautiful place.